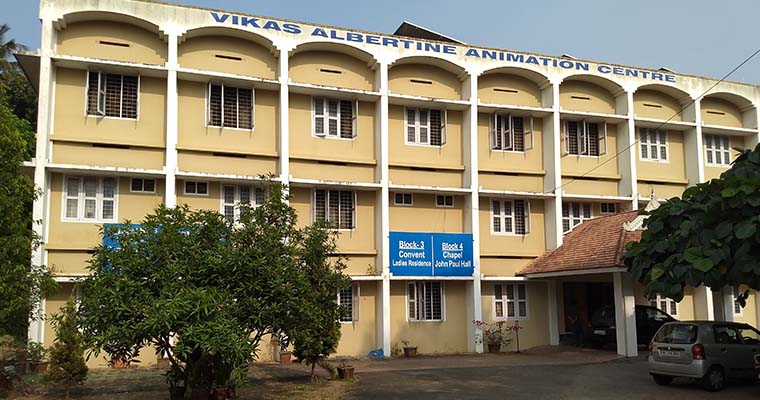 Erected on 04th October 1987, the Diocese of Kottapuram had no “Pastoral Centre”. In order to strengthen the pastoral activities of the diocese, Bishop Dr. Francis Kallarakkal wanted to build a Pastoral centre for the Diocese. A piece of land was purchased near market at Kottapuram for this purpose. Foundation stone for the centre was blessed and laid by Bishop Francis on 11th August 1990 and the work was completed in two years. The pastoral Centre was named 'Vikas' and was blessed by him on 30th May 1992. Different training programmes for religious and lay people are conducted and the offices of diocesan Associations and Departments like Catechism, Family Apostolate, Bible Apostolate are functioned at Vikas. In the beginning the Diocesan Social Service Wing, namely, KIDS also functioned at Vikas. In 1999 KIDS offices were transferred to its own building. Due to poor facilities, there were no for residential programmes at Vikas. Later with more facilities for nearly 100 people to stay overnight, three new buildings were built, having separate residential facilities for gents and ladies. Also a new building having big conference hall and dining hall was built in the same compound. The new buildings were blessed by Bp. Dr. Francis Kallarakkal in the presence of Mar James Pazhayattil, the Bishop of the Diocese of Irinjalakkuda on June 16th 2007 and was named 'Vikas Albertine Animation Centre'.