A Short History of Cranganore (Kodungallur) 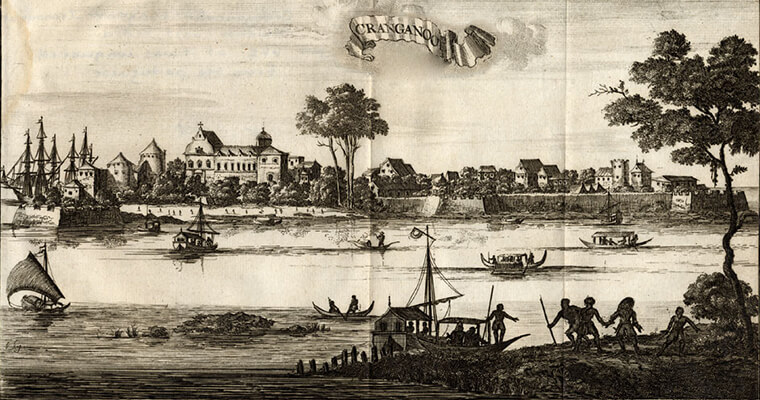 From the very ancient days Cranganore (Kodungallur) was a famous and prosperous seaport of the East. Known as Muziris to the Greek and the West, Cranganore is described as the “Thriving Town of Muchiri, where the beautiful large ships of Yavanas, bringing gold come, splashing the white foam on the waters of Periar in the Chera Kingdom and return laden with pepper.” This became also the earliest Christian centre of Malabar, since, according to the common tradition, it was here that St. Thomas the Apostle landed first and preached the Gospel of Christ in the early years of the first century of the Christian era. It was to this capital of Chera Kingdom that Thomas of Cana came from Syria with his followers and settled down. We can still see here the monument built in memory of Thomas of Cana. The existence of a thriving Christian Community here attracted the attention of others and the Bishops who came from Persia chose this place for their residence. Having continued to be a prosperous and very important centre of trade and Christian life till the middle of the 14th century, it has gradually fallen into complete ruin and decay. The very foundation of Cranganore became insecure, the entrance of her harbor became choked up and the remorseless monsoon washed away her bulwarks.

As all the natural calamities tolled the death knell of the commercial prosperity of Cranganore so also the glory of the Malabar Church was lost either because of the little contact with the Roman Church or because of the lack of good and dedicated leaders. The Christian spirit lay dormant for a long time and had to pass through a long night of spiritual interregnum. From this slumber of ages the Malabar Church was suddenly awakened by the arrival of the Portuguese and especially by St. Francis Xavier, the Second Apostle of India on the Malabar Coast. Where ever in Malabar the Portuguese established themselves, communities of St. Thomas Christians who embraced the Latin Rite, arose and flourished. So at present the Catholic population of the Diocese of Kottapuram consists mostly of the descendants of those ancient St. Thomas Christians of Malabar who embraced the Latin Rite during the Portuguese regime in the 16th and 17th centuries, augmented by conversions chiefly from the ranks of Hinduism, as in the case of almost all the Dioceses of Kerala. 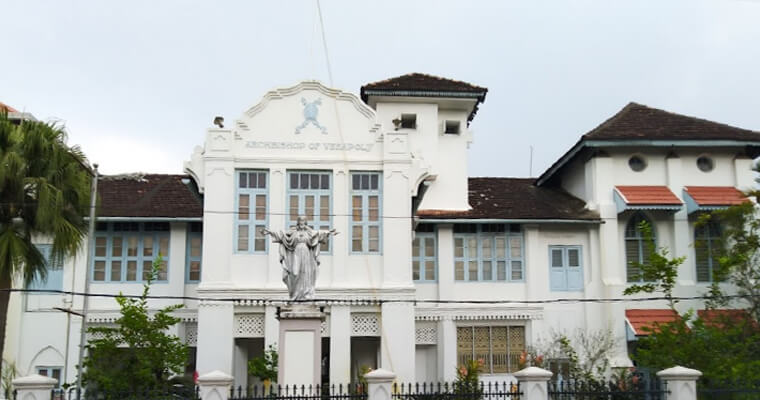 The Archdiocese of Verapoly was originally known as the Vicariate of Malabar. It had its origin in 1657, with the arrival of Carmelite Missionaries; most prominent among them was Father Joseph of St. Mary, better known as Joseph Sebastiani. They had been deputed under Father Hyacinth as Apostolic Commissar, by Pope Alexander VII to effect a reconciliation of St. Thomas Christians of the Syro-Chaldaic Rite, who had seceded from their Archbishop Francis Gracia, S.J. The majority of them had in 1653 revolted against the Archbishop and forsaking his authority by taking an oath for the purpose at the foot of a cross-thereafter called the “Coonen Cross”-situated in Mattancherry, had illegally made their Archdeacon the Archbishop by going through a farcical ceremony. By the efforts of Sebastiani a large number of seceders were brought back to the true fold. Nevertheless, they refused to be under the authority of their lawful Archbishop or under any prelate of the Jesuit Order (called by them ‘Paulists’).

Rome, being informed of the situation by Sebastiani in person, decided to entrust the Carmelites with the spiritual care of the Syro-Chaldaic Rite. For this purpose the Vicariate of Malabar was erected by Pope Alexander VII on the 3rd of December, 1659. Sebastiani was consecrated titular Bishop of Hierapolis on December 15, 1659, and sent back to Malabar with the title of Vicar Apostolic Administrator of the Archbishopric of Cranganore.

The new Vicariate eventually established its headquarters in the island of Verapoly. The conquest of Portuguese territories in Malabar by the Dutch and especially of Cochin in 1663, and the consequent expulsion of all European Catholic Missionaries from the Dutch territories and elsewhere threatened the very existence of the Malabar Vicariate. Nevertheless, it survived under the Indian prelate Parambil Chandy (Alexander de Cambo) whom Sebastiani had consecrated as his successor before he left Malabar in 1663. Before long Carmelites were allowed to resume their ministration, which was now extended also to the Catholics of the Latin Rite who were under Portuguese protection.

On the 13th of March 1709 by a Brief of Pope Clement XI the Malabar Vicariate was suppressed and the Vicariate of Verapoly took its place with Bishop Angelo Francisco as its first Vicar Apostolic. By the Brief “Multa Praeclare” of Pope Gregory XVI dated 24th of April 1838, the Sees of Cranganore and Cochin which at that time included also Quilon were annexed to the Vicariate of Verapoly, which thus came to comprise the whole of Malabar. However, in 1845, Quilon was served from Verapoly as a suffragan Vicariate. When by the famous Apostolic Letter “Humanae Salutis Auctor” of Leo XIII dated September 1, 1886, the Hierarchy of India was established, the Vicariate of Verapoly was raised to the status of an Archdiocese with the Most Rev. Dr. Leonard Mellano of St. Louis, OCD as its first Archbishop, who was the 17th in the line of Vicars Apostolic.

Along with this in 1886 the Diocese of Cochin was resuscitated and reconstituted with 34 Latin churches taken from the Archdiocese of Verapoly and the Diocese of Quilon. On 19th of March, 1887 the Catholics of the Syrian Rite were separated from those of the Latin Rite and placed under an Administrator Dr. Marcelino Bernard of St. Teresa, OCD, whowas consecrated co-adjutor to Archbishop Mellano. By the Brief “Quod Iam Pridem” of Pope Leo XIII dated 20th of May 1887, the Syrians were exempted from the jurisdiction of the Archdiocese of Verapoly and the twoVicariates of Trichur and Kottayam were erected with Dr. Adolphus E. Medlycott and Dr. Charles Lavigne as their Vicars Apostolic. In 1890 two more Vicariates-Ernakulam and Changanacherry-were created and all the four were entrusted to the Indian Bishop of the Syrian Rite. Thus the Archdiocese of Verapoly came to consist exclusively of Latin Catholics.

On 14th July 1930, by the bull, “Ad Christi Nomen” of Pius XI the new Diocese of Vijayapuram was formed and dismembered from Verapoly and its administration was placed in the hands of Discalced Carmelites, who left Verapoly, which they had served for 273 years. With this change the Archdiocese came under the administration of the Indian clergy, except for continuance of its head in the Person of the Archbishop the Most Rev. Dr. Angel Mary, OCD. The Indianisation was completed when, on 29th November 1932 the Most Rev. Dr. Joseph Attipetty, was nominated Co-adjutor to Archbishop Dr. Angel Mary. Dr. Joseph Attipetty assumed the reins of administration on 21st of December 1934 after the resignation of Archbishop Angel Mary, the last in the long line of European prelates to the Archdiocese.

On the demise of the Most Rev. Dr. Joseph Attipetty on January 21st 1970, Rt. Rev. Msgr. Cornelius Elanjikal, was elected Vicar Capitular on January 24, 1970. He was nominated Bishop of Vijayapuram on February 15, 1971 and Rt. Rev. Dr. Joseph Kelanthara, was nominated the Archbishop of Verapoly on January 16, 1971. He was ordained Bishop by the Most Rev. Dr. Simon Lourdusamy, then Joint Secretary to the Congregation of the Propagation of Faith on April 4, 1971, and became Ordinary on April 8, 1971. Bishop Antony Thannikot, was nominated Titular Bishop of Tigillava and Auxiliary to the Archbishop of Verapoly on December 19, 1978. He was ordained Bishop by His Grace the Most Rev. Dr. Joseph Kelanthara, Archbishop of Verapoly on March 11, 1979. He died in Lourdes Hospital, Ernakulam, on February 24, 1984. 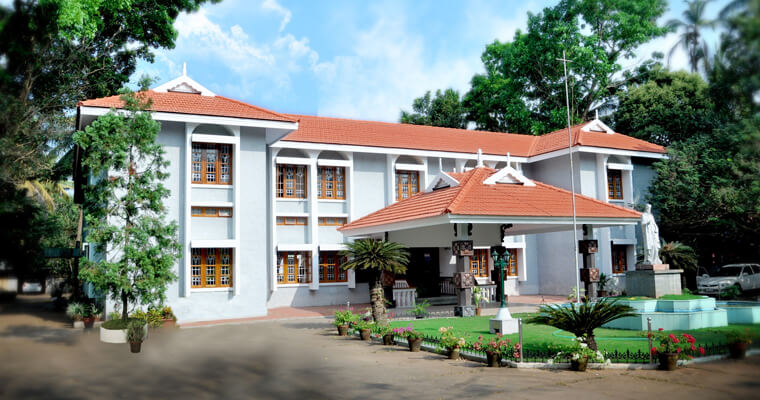 The Most Rev. Dr. Cornelius Elanjikal, was nominated the Archbishop of Verapoly and took charge of the office on March 19, 1987. His Pallium investiture took place on June 29, 1987, by the Most Holy Father Pope John Paul II. As the first prominent fruit of his reign, with the permission from the Most Holy Father, by the Papal Bull “Que Aptius” dated 3rd July 1987, the Diocese of Kottapuram was erected and the solemn declaration of the same was made on 1st August 1987. His Excellency Rt. Rev. Dr. Francis Kallarakkal was appointed the First Bishop of the New Born Babe by the Apostolic Letter “Romani et Pontificis” dated 3rd July 1987. Together with the Episcopal Ordination of the Bishop elect Dr. Francis Kallarakkal, on the feast day of St. Francis Assisi, the Diocese of Kottapuram was officially inaugurated on October 4, 1987.

The most Rev. Dr. Francis Kallarakkal was nominated as the Archbishop of Verapoly on 20th February 2010 and took charge of the office of on 11th April 2010. During Installation Ceremony, Archbishop Francis Kallarakkal was appointed as the Apostolic administrator of the Diocese of Kottapuram. His pallium investiture took place on June 29, 2010 by the Most Holy father Pope benedict XVI. Pope Benedict XVI appointed Rt. Rev. Dr. Joseph Karikkassery, Auxiliary Bishop of Archdiocese of Verapoly, the bishop of Kottapuram Diocese. The Papal decree was made public in the Verapoly Metropolitan Archbishop’s House on 18th December 2010 at 4.30pm by the Most Rev. Dr. Francis Kallarakkal the Metropolitan Archbishop of Verapoly. Simultaneously the declaration was also made in the Kottapuram Bishop’s House at Kodungallur in Trichur district, Kerala.